It's like I'm in high school again. That awkward feeling of not quite fitting in, of hoping the cool kids take notice of you and decide to show that they think you're cool too. I'm talking, of course, about my cat, Schrodinger with the two dot things over the O in his name. Yes, I know how to do the special Ö, but it's way more fun to say it this way and annoy my husband 😉

For years, I've been telling myself I'm a dog person. And even though I grew up with cats, I went from the age of 17 to 30 without having a feline companion in my life. Then our little girl became obsessed with cats (and pigs, but God, no!), so we decided to take the leap and adopt a sweet rescue kitty.

Life = forever changed for the better. 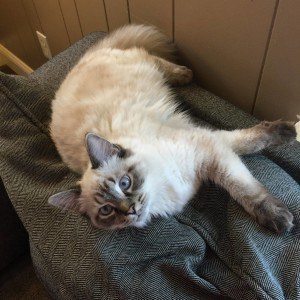 I guess I never stopped being a cat person, and it didn't take long for me to realize that Mr. Kitty is basically the best thing that ever happened to the world (after, umm, my daughter and husband, of course)!

As a person with OCD, I recognize similar behavior patterns in my cat. He also likes to follow a schedule, to keep things tidy, to relish in his favorite spot. He's also completely logical most of the time, until he suddenly loses his sh*t and runs around the house like an animal possessed.

What can I say? I relate.

I also, for some reason, love having to work for his affection. Like if the cat decides to sit on my lap, I know I've really *earned* it, you know? It makes me feel cool, worthy, popular.

Yes, my social standing is apparently defined by my cat. I think that means I've reached the final level of crazy-cat-lady-dom. Oh God! I hope the other cat ladies think I'm cool…